Who loves water melons? We do! And water melon socks - what's not to love? These fun socks designed by Minna Metsänen will bring a smile to your face while you're knitting - and every time you look down at your feet.
Novita Kesä 2020 -lehti (in Finnish)
39
Intermediate 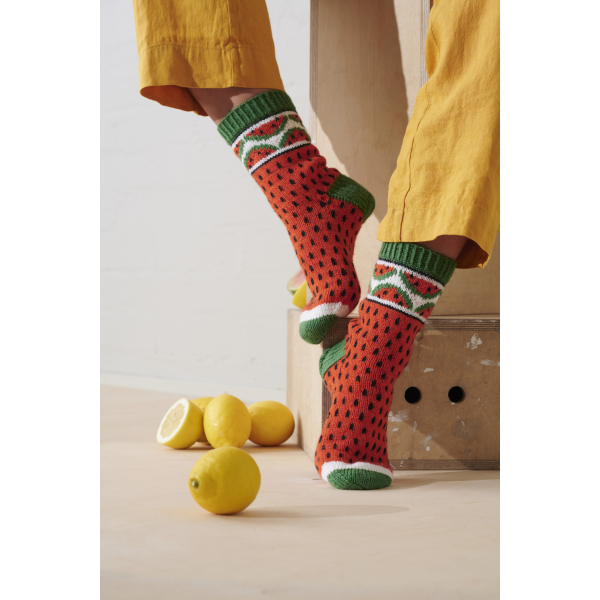 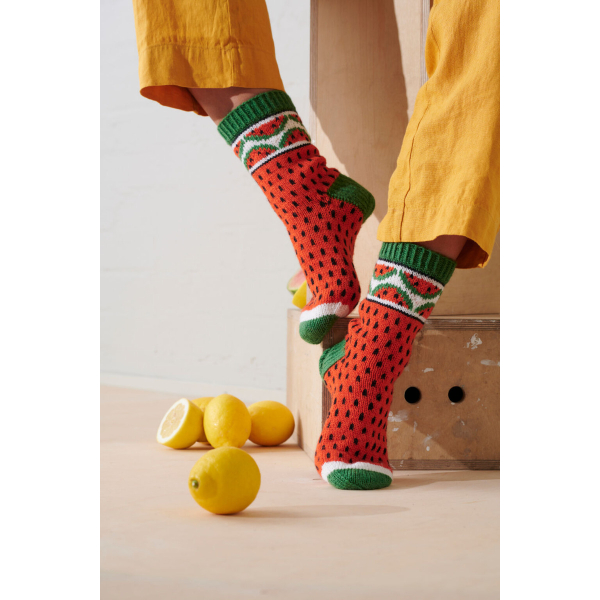 Using the Snufkin yarn cast on 60(64)68 sts and divide them onto four needles, 15(16)17 sts each. The beginning of round is between needles I and IV. Work twisted ribbing in the round for 10 rounds. Knit 1 round.
Join Stinky and knit 1 round. Join Moomintroll and knit 2 rounds.
Begin the colourwork pattern on row 1 of chart I(II)III. Repeat the 15(16)17 st pattern 4 times. Work rows 2-12 of the chart. The seeds and rinds are embroidered on the finished sock using duplicate stitches.
Knit 2 rounds using Moomintroll and 1 round using Stinky.
Begin the colourwork pattern on row 1 of chart IV. Repeat the 4 st pattern 15(16)17 times. Work rows 2-10 of the chart, then keep repeating rows 1-10.
When the leg measures approx. 16(18)18 cm and you have last worked one Little My row, break yarn.
Begin the heel flap: move the sts on needle I onto needle IV = 30(32)34 sts. Leave the other sts on hold. Join Snufkin. Turn work, slip 1 with yarn in back and purl to end, evenly decreasing 4 sts = 26(28)30 sts.
Turn work and begin the reinforced stitch pattern:
Row 1: *slip 1, k1*, repeat *-* 12(13)14 more times. Turn work.
Row 2: slip 1, purl to end. Turn work.
Work rows 1-2 13(14)15 times in total [= 26(28)30 rows].
Begin turning the heel. Continue the reinforced pattern as established. Work RS row until 9(10)11 sts remain. Skp (= slip 1 knitwise, k1, pass slipped st over), turn work. Slip 1, p8, p2tog, turn work. Slip 1, work to last 8(9)10 sts, skp. Continue in this manner, decreasing at the ends with 10 sts in the middle. When only the middle sts remain, divide them onto two needles, 5 sts each. Break Snufkin and join Little My.
Using needle I pick up 13(14)15 sts from the left end of the heel flap + 1 st from between the needles. Knit the 5 heel flap sts and knit the picked-up sts through the back loop. Knit the sts on needles II and III. Pick up 13(14)15 sts from the right end of the heel flap + 1 st from between the needles. Knit the picked-up sts through the back loop and knit the 5 flap sts onto needle IV.
With these 68(72)76 sts work stockinette st and begin gusset decreases: at the end of needle I, k2tog; at the beginning of needle IV, skp. Repeat the decreases every other round until 52(56)60 sts remain. Redistribute the sts, 13(14)15 sts per needle.
Note: When you have worked 2 rounds with Little My after the heel, resume the colourwork pattern on either row 1 or 6 of chart IV, making sure to maintain the pattern on needles II and III (instep). On needle I begin at the edge of the chart and work the 4 st pattern as needed to end of needle. On needle IV determine where to start so that the pattern continues on needle I. When you have decreased the extra sts, the pattern continues without breaking.
Work until the sole measures 18(19)20 cm and you have last worked at least 1 round with Little My.
Begin the toe decreases with 6 rounds of Moomintroll, then use Snufkin for the rest of the piece.
Begin toe decreases: At the end of needles I and III, k2tog, k1; at the beginning of needles II and IV, k1, skp. Decrease as established on every other round until 7(8)9 sts remain on each needle. Then work the decreases on every round.
When 8 sts remain, break yarn, pull it through the sts and securely weave in.
Knit the other sock in the same manner.
Finishing
Following the charts, embroider the details on the leg with Snufkin and Stinky.
Lightly steam the socks.
This pattern is publish in the latest issue of Novita Magazine. You can buy your own copy here
Skill levels